The Native Sons of the Golden West was founded 11 July 1875 by General A. M. Winn, a Virginian, as a lasting monument to the men and women of the Gold Rush Days. General Winn lived in California during the Gold Rush and was impressed with the spirit and perseverance of the “Forty-Niners.” In speaking of his object in organizing the Order General Winn said “For twenty years my mind had been running on some lasting style of monument to mark and perpetuate the discovery of gold I could not think of anything that would not perish in course of time. At last it came to my mind that an Order composed of native sons would effect the object and be sustained by pride of parentage and place of nativity while it would be an imperishable memento an institution that would last through all time.”[1] 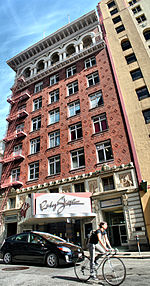 The Native Sons of the Golden West building in San Francisco.

The chief objects of the Order as set forth in its constitution were, “To perpetuate in the minds of all native Californians the memories of the days of ’49 to encourage a lively interest in all matters and measures relating to the promotion of the national interests and to the upbuilding of the State of California.” Today, the Native Sons of the Golden West is open to membership from any native-born, current or former resident of California origin. The Native Sons of the Golden West is a charitable and fraternal organization. Organized locally into “Parlors,” the group is perhaps best known for the large number of commemorative markers it has placed throughout the state